Czech coach, two-time winner of the CEE Cup, now is a star in Iran

Football festival in Iran? That is when the city rivals from Tehran are coming to the front. Persepolis in red jerseys against Esteghlal FC in blue. And on the "Blue" bench since last November we can see a Czech assistant coach. Jiří Saňák started his coaching career at the age of seventeen when he had to end up with football because of a cancerous tumor in his shoulder. In the fight against the malign disease, he lost part of his bones and muscles. While attending chemotherapy, he studied a coaching license and now enjoys a very prestigious engagement with the world-famous Winfried Schäfer. He has been also the head coach in the CEE Cup, where he won the first two years with Mladá Boleslav.


How did it happen that you end up working with the famous German coach Winfried Schäfer, moreover in Iran, which is not an usual destination for Czech trainers?

I have been able to cooperate with a German coach because of my friendship with Peter Ruman (a former footballer) who has long been living in Germany. He recommended me to Winni, who was looking for an assistant. This opportunity was so tempting that after consulting the family and my closest friends I decided to go to Iran. In fact, I didn't really think about the Country, because the possibility to work with such a recognized trainer and world-renowned man in the international football community was crucial. German, Czech, Jamaican and German. Great!

And now I can confirm that I would never have experienced this life and sport adventure nor even if I had bought it (laughs). I acknowledge that it was a jump to another, not only football, but world. I am happy and proud of this step and I am glad that we want to continue in this direction. Iran is unknown to Czech trainers and is probably underestimated. 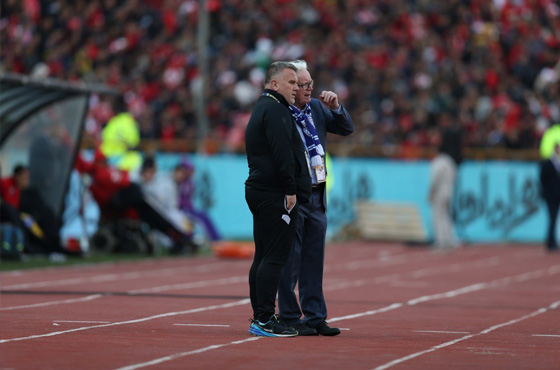 How would you describe the work of Winfried Schäfer?

Winni is a coach who, without distinctions, respects every person in the club and firmly believes in teamwork. He knows that without it there is no success in football. He has a clear idea of the training process, the way of play, the principles of play in the defensive and offensive phases. He knows how he wants to play. He has so much experience that surprises me every day. He's the boss and it's fun to work with him. I admire his sense of play, tactics and individuality.

What is exactly your role in the team?

My position is absolutely clear: I am, together with my Jamaican colleague Miguel Coley, his assistant, we conduct the training process.

If he deems it's appropriate, he joins the training sessions: we jointly analyze the match and we prepare the strategy. I prepare and conduct video analysis, evaluation and preparation for the game. The coach daily wants to know our opinions , that first I have to defend and explain, then we evaluate and decide. In this co-operation I feel as a coach, not an assistant.


Only men are allowed to play football, fans camp in front of the stadium

What did surprise you the most about football in Iran? How would you approach the Czech spectator to the specific features of the local football environment?

The surprises were many. Mainly the speed of the game, the enthusiasm of the players during the trainings, the respect between coaches and players, the interest of the fans... Of course Iran has its own weaknesses, but be careful, everyone is learning very fast and I have to say that the league has improved a lot in the last six months, mainly tactically. I was surprised by the popularity of Esteghlal FC: I didn't know it was one of the most famous Asian clubs, supported by nearly 30 million fans. In Tehran, the derby with Perspolis is always sold out. Both clubs belong to the government so there is a huge rivalry between them. A great specificity is that only men can attend at the stadium. And I have to mention the great mania of clubs' supporters: for the first time I've seen fans camping in front of the stadium since two days before the city derby. 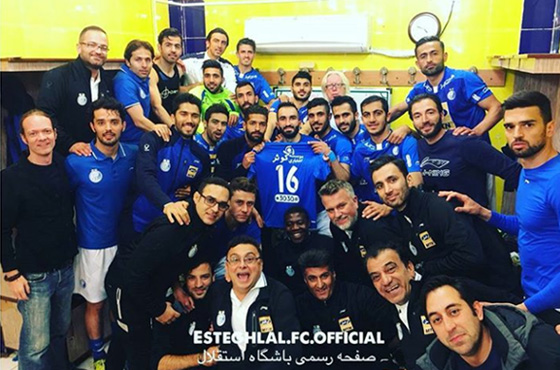 How is the life of a popular Tehran club's assistant coach? The stadium has a capacity of nearly a hundred thousand people and it's almost always full, you're followed by almost 28.000 fans on Instagram: can you walk down the street?

This aspect was probably the biggest surprise for me. I can walk around quietly, but I can't do it without taking pictures and greeting people, who surprise me with their warmth and hospitality. I can't go with Winnie anymore, he's a big celebrity here. I wish everybody to experience being on the field with a hundred thousand fans, and even more after a winning game. It's an indescribable experience, that sparks goosebumps all over your body. Our club has fans all over Iran, and if we play away, for example, there are 25.000 fans at the stadium, of which 20.000 are blue.

How does your family deal with your work? Are your wife and children in Iran with you?

I am alone in Iran, it was a test for all of us. A footballer or a coach can't stay without family support. Thanks to the technologies we are in regular contact and we talk much more than ever before. Thanks to my family I can experience my dream. It's an incredible luck. Without exaggeration and cliché, they are my support, you know it when you are alone and you learn to be with yourself.

From the coaches who have worked, for example, in the Arab countries, we often hear that their role in those countries is very ungrateful. Trainer dismissals are very frequent. Esteghlal FC has more patience with the coaches, right?

What does an ungrateful role mean? If a coach is awaiting gratitude, he can't work anywhere. This is happening in our country as well. I experienced it. Everywhere in the world our work has two sides like a coin. In this regard, it is similar anywhere. We are experiencing a super season, we are lucky. When we came the team was in fourteenth place, now we are third. We advanced from a tough group in the Asian Champions League to the top 16 and we'll play the final of the Iranian Cup. It's challenging and beautiful at the same time, and we all know how thin the border is. It is clear that as a stranger you are under much more pressure, everyone is waiting for what you will show. You have to respect the Country and the culture as well as learn the language.

So you study Persian?

Exactly, I'm learning everyday. Also when I played in Germany I learned the language. It is very important for understanding people and their mentality. One learns new things every day.

In the Czech Republic you have gained a reputation as a youth coach. How's the work with young players in Iran? How do the Youth Academy work?

Here I think Iran doesn't take advantage of the potential of its talented young players and doesn't think about the future. Academies are only inside the clubs, they don't have a controlled process, the training fields are disastrous. In this regard their culture of non-planning is clearly visible.

Because of cancer, at the age of seventeen you had to end up with the career as an Union Berlin player, you went back to the Czech Republic and took life's consequences. In one interview, you stated that during the course of the treatment, you studied a coaching "C" license. So it could be said that from this very difficult period you eventually reverted to the current very attractive engagement. How do you look back at that sequence of events?

Beautiful question, let's go to it (laughs). Hard times, an incredible shift in living values, in how you look at life, at bad habits, which one learns from life, questions like: Why me? What there's behind? 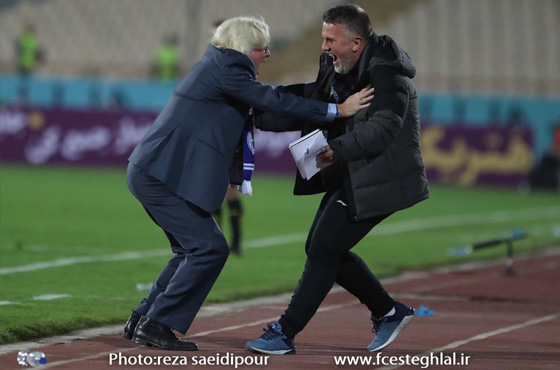 Mainly I know that nothing is just a coincidence or bad luck. You find that it was the logical outcome of my life in the past. Yes, I had a "C" license during chemotherapy, and coaching fully absorbed me. If I look back, I clearly see that everything describes the word love. Love for what you're doing, the love of the people you meet, the love for football. Everything a person goes through has its meaning, it's a test, a training. The tumor was a training. All engagements, teachings, mistakes, experiences. I love this work. You have a thought, an idea, and then you can see the players doing it for a moment during the game, it's a great feeling. It won't happen so often, but then it's worth it. This experience is the same when you are playing in Ústí nad Orlicí division, with U19 in Mlada Boleslav or with Esteghlal FC Tehran.


The CEE Cup is amazing

How do you recall the participation in the CEE Cup, which you won with Mladá Boleslav in the first two years?

Great tournament, two finals in Ďolíček. The first one against Levski Sofia, we won 1: 0 with Honza Mizec. The second final against Sparta with David Holoubek on the bench, we won 4:3. For us, for Boleslav, it was the prelude to winning the national league, which was an extra success for Mladá Boleslav.

How do you rate the CEE Cup compared to other foreign youth tournaments?

The CEE Cup project is amazing. I like the tournament very much, and I follow it every summer. I think everyone in the Czech Republic can be proud of this tournament. Excellent organization, venues, security.

Are you following the career of your ex-players? In the league, for example, the stoppers Křapka and Hůlka, the midfielder Kateřiňák or the attacker Klobása...

I'm in touch with the guys, I follow them. I'm glad I could train and experience beautiful moments with Adrian Vimer, who I consider to be one of the best coaches in our country. I believe they have learned something too. In the end, you will always find that the best players are the toughest, the most professional. Not only in the youth categories. Now I'm training the Iranian national team who will participate in the world championship. Omid Ebrahimi, Vooria Ghafoori, Pejman Montazeri, Roosbeh Chesmi, amazing guys.

What do you think about youth football in the Czech Republic today? Are there ideal conditions for the upbringing of new football stars?

My opinion is positive, I like our football, our players are smart. If you could hear how positive Winni talks about our matches... We are doing new projects, creating new academies, we have nice playgrounds. A lot of people make up and train hard, work hard. Let's get together, everyone doing his best. One thing I know is that there is a lot of potential in Czech football and there is a huge number of very capable people in it. We only need to encourage, respect, speak and laugh.

Born on May 14, 1978, he played football in Ústí nad Orlicí. After leaving school he went to study in Germany where he joined the 1. FC Union Berlin. At the age of 17, however, he suffered from cancer, so he returned to the Czech Republic and began to study a coaching license. As a coach he led the youth teams of SK Slavia Praha, SK Sigma Olomouc, FC Baník Ostrava and FK Mladá Boleslav, where he was also the Chief of Youth. In the Czech top competition he appeared as an assistant coach in FK Jablonec and FK Mladá Boleslav. He also acted as a youth representative. Since November 2017, he's the assistant to the German coach Winfried Schäfer at the Iranian club Esteghlal FC, with whom he is also competing in the Asian Champions League. 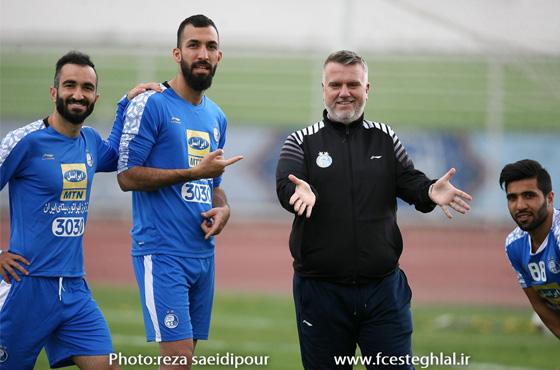